10 Best Fireworks Displays in the USA 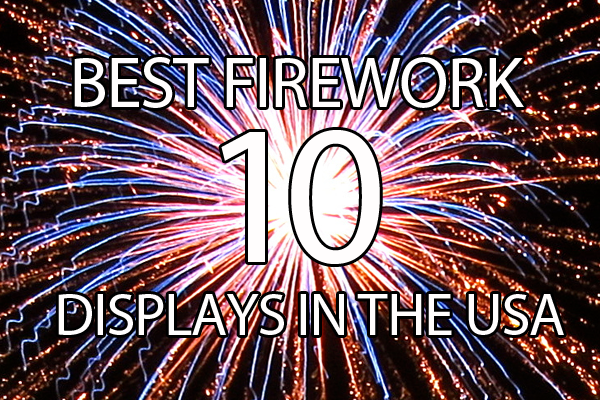 As a great man, Homer J. Simpson, once said, "What better way to celebrate our nation's birth than by blowing up a small piece of it?"

We couldn't have said it better ourselves, so to get ready to celebrate America's Independence, here is out list of the ten most spectacular fireworks displays from coast-to-coast:

Macy’s massive show is the largest in the country, using 40,000 effects in just 25 minutes. If you can’t be in New York City on the fourth, don’t worry, millions watch it on television.

Grab a picnic blanket and set-up shop early, as this draws over 500,000 visitors. Watch as the fireworks explode over the reflecting pool to the tune of the National Symphony Orchestra. Although there are security checkpoints, it is worth it.

With a price tag of $2.5 million, Boston’s annual firework display is easily one of the most expensive. Over 20,000 pounds of pyrotechnics are blasted into the atmosphere over the course of 21 minutes, making revelers “ohh” and “ahh” alike.

Addison’s thirty minute show is an impressive tradition that attracts over 500,000 viewers. The show takes place in Addison Park and begins with an air show by the Addison Airport. Parking is limited, so try walking over from nearby towns.

After a full-week of celebrations, Philadelphia’s 15-minute firework bonanza attracts 500,000 viewers every year. Live shows precede the firework display, with headliners such as The Roots playing in years past. Due to inclement weather, this year’s celebrations are rescheduled for Sunday, July 5th, at 9:30 P.M.

The 21-minute show regularly anticipates a showing of more than 600,000 people, so get your spot early! The fireworks are launched from the Municipal Pier and from select barges near Pier 39. Afterwards, dance the night away – the Pier 39 Entrance Plaza will be hosting live entertainment into the wee hours.

Seattle’s community funded pyrotechnic display is one of the best in the country, with ample seating and vantage points offer a glimpse of 10,000 fireworks exploding in the air.

Atlantic City’s show is one of the longest displays in the country, approximately 46 minutes long and divided into two parts. If you want to see any of it, make sure to get reservations early – this event books up fast.

This 20-minute firework show has the added bonus of looking like a giant 3-D laser show, as the fireworks reflect of the steel legs of the arch. With a half a million visitors, make sure to grab a spot early for the 9 P.M. show, the visual spectacle is certainly worth it!

New Orleans gets about 200,000 viewers every year for its 13-minute spectacular. Approximately 3,000 fireworks adorn the sky, so make sure to grab a seat near a levy.

Of course, if you just want to stay home and have a killer BBQ, that's cool too.

Panama City, FL is a beautiful destination nestled between Pensacol

As a vacation rental homeowner, you are probably already using ever

With the pandemic fueling a travel bonanza this summer, vacation re

It's August and there's still time to make travel arrangeme

It's not too late to plan for your summer getaway, as summer do

for news and updates

Your email has been added to our list. Thank you for joining the HomeEscape community!